But before we all gladly consign the past 12 months to the history books, there’s time to take a look back at some of the year’s PR gaffes.

Having already brought you round-ups of the best and worst media interviews of 2016, we have now combed back over the year to compile the PR errors which stuck in our minds for all the wrong reasons:

No, this is not about his decision to hold an EU referendum that divided a nation (and cost him his job).

Instead it is about his handling of media interest in his family’s finances, which proved to be something of a case study in how not to handle the media during a crisis.

Back in April, the then Prime Minister found himself at the centre of a media storm after his family’s offshore fund was identified in the Panama Papers.

Initially Downing Street, tried to shut the story down by simply saying the issue was a ‘private matter’, which was as bad as saying no comment.

But worse was to follow as the situation deteriorated in to a farce with three further statements issued during the course of a week, all of which failed to address the fundamental point of whether his family had benefited from offshore investments in the past.

Finally, at the fifth time of asking and at the end of a week of endless speculation, he made a full statement about his financial affairs and admitted in a TV interview he had profited by more than £30,000 in an offshore tax haven.

In it he said he wanted to be ‘as clear about the past, about the present, about the future, because frankly I don’t want to have anything to hide’ – a good statement, but one which would have been much more effective if it had come at the start of the controversy.

Have you heard the one about the PR competition which attracted so few entrants a ‘winner’ was made up?

Or about the lucky ‘entrant’ no-one could confirm existed who was sadly ‘too ill’ to enjoy his prize?

Well, this may sound like a far-fetched joke, but it is actually a real life farce which damaged reputations and saw someone lose their job.

The competition, which dramatically spiralled out of control, was organised by Chesterfield Football Club which held a raffle for a place on its pre-season training camp in Hungary.

Despite such a high-profile prize, the competition attracted just four entrants and it looked like the idea was quietly dropped.

But anyone who knows football will tell you supporters have long memories and when fans questioned what had happened it was announced the competition had been won by a James Higgins, from Surrey. Some people have all the luck.

Let me tell you a story about what just happened at my football club, Chesterfield FC...

The club did a raffle for a lucky supporter to win a place on the pre season tour to Hungary. Tickets £10 a pop...

Sales were slow. Really slow. Like a handful at most - 4 or 5. So the club tried to quietly drop the idea...

Fortunately the message board members have good memories and questioned why there was no mention of the raffle taking place anymore...

The club subsequently announced that the draw had been won by 'Surrey-based Spireite James Higgins'...lucky guy

Only thing is, no-one has ever heard of James Higgins... Nor were there pics of him holding a shirt, fists clenched, with tickets in hand..

The team jets off for Hungary. A die hard fan travels to the game - and there's no sign of James or indeed any fan with the official party..

Rumours start to circulate on the message board. Where is James, is he ok? Questions are raised to the club...

Next communication from the club: James was too ill to travel. Hmm. #prayforhiggins begins to trend...

Poor James. Very unfortunate. Some might say convenient. Then the club said anyone who'd bought a ticket could be refunded if they asked...

Why? asked the fans. Why would they offer a refund on a legit raffle draw, just cos the winner fell ill?

Social media searches failed to throw up any mention of James. Meanwhile, the club deleted the illness story from the website...

Supporters becoming a bit frustrated at this point. It *appears* the club charged £10 a pop, made about £50 so decided to scrap the idea

Next thing, statement from one of the board of directors... pic.twitter.com/cTR7BIrMoN

Got to laugh, or I'd cry. My club is rotten. Lies, cover-ups, bullshit - if it wasn't for those pesky fans, they'd have gotten away with it.

Other fans looked out for him on the trip but there was no sign. The club reported on its website he had been prevented from travelling by illness, under the headline 'Disappointment for raffle winner'. It added that ‘as a gesture of goodwill’ people who had entered the competition could get a full refund.

But some supporters smelt a rat and after one of them contacted club director Ashley Cooper he issued a statement announcing the winning entry was ‘not legitimate’ and that information supplied to the communications department had ‘clearly been falsified’.

Perhaps not surprisingly the head of the club’s communications and marketing department lost his job as a result.

As own goals go this one was pretty spectacular.

The last thing beleaguered train operator Southern Rail needed this year was its own PR activity hitting the buffers.

But it certainly added to its growing collection of negative media coverage when it produced a Twitter campaign encouraging its customers to challenge Rail, Maritime and Transport Union (RMT) strikes.

Headlined ‘Let’s strike back’, it told its customers to tell the union ‘how rail strikes make you feel’ complete with the hashtag #SouthernBackOnTrack – a bold move for a rail operator with a feed which is often full of complaints from customers.

So it was not surprising that it received what can only really be described as a backlash.

Time to get back on track. Tweet @RMTunion & tell them how rail strikes make you feel. https://t.co/IVaRAGBBSV #SouthernBackOnTrack pic.twitter.com/lpBcXs9K5f

Instead of messages of support, customers used their 140 characters to point out that they constantly faced delays on non-strike days; list recent examples of explanations for poor running services; and accuse it of trying to bully the union.

Others predicted, quite early on, the hashtag would not go the way the company’s PR team envisaged.

And a search on Twitter at the time suggested it completely lost control of the hashtag, with politicians such as Caroline Lucas accusing Southern of ‘trying to shift the blame’.

While their passengers suffer for months & months, @SouthernRailUK tries to shift the blame. Their gall knows no limits. #SouthernFail https://t.co/L1nSIDvQCe

The dubious social media activity was supported by newspaper advertisements and posters. Such was the customer backlash it later emerged Southern asked for the posters to be ‘removed and destroyed’. A leaked email seen by the BBC said the activity had caused ‘extremely negative sentiment’ and that a decision had been made to cancel the poster campaign.

Yet despite this, the company refused to apologise for its actions saying "We make no apologies for this campaign - our aim was to get the debate going."

In reality there was very little debate, with Southern’s points lost amid the volume of dissenting voices.

Any attempts to ‘get back on track’ through PR had been completely derailed.

We all enjoy sharing the odd gloat on social media.

Perhaps it is our football team’s latest victory, a new car we have just bought, or simply wanting to show everyone what a good time we are having.

But most people restrict this boasting to their personal accounts, simply because work accounts need to be more professional, particularly if the nature of the work is sensitive and emotive.

But not everyone seems to have paid attention to that part of their social media training and the consequences are huge.

When the founder of law firm which specialises in fighting support claims for children with special educational needs (SEN) issued a series of ill-judged tweets, local authorities quickly promised to review their contracts with the company.

When people responded to the seemingly gloating and mocking tweets, a picture of a supposedly laughing kitten was posted on the account with the text ‘some great tweets received today from people who just see a one sided argument… just shared them with my cat’. 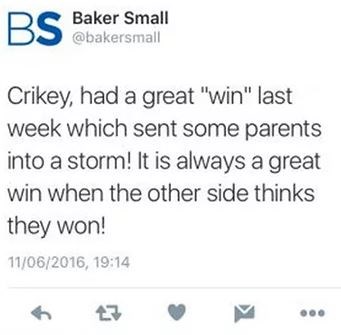 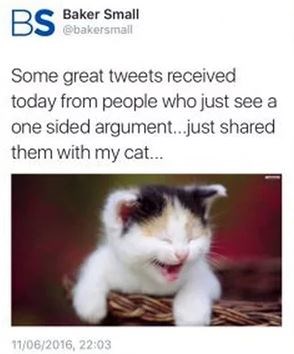 The messages understandably triggered a backlash on Twitter from outraged parents.

Baker Small subsequently deleted the tweets and issued an apology on the social media channel together with a promise of a charity donation.

But as is so often the case, the damaging publicity had already spread from social media to newspapers.

Mr Small later issued a further apology where he appeared to deflect blame for his actions, something which is generally not well received in a crisis media management situation.

He did, a few months later, admit he had been ‘an idiot on Twitter’ and perhaps wisely the company’s account no longer exists.

If you paid attention in your social media training you will of course know an important tip for engagement is to always try and use relevant trending hashtags.

Sadly a member of the social media team at Homebase ignored the ‘relevant’ part of that advice and consequently the company found itself on the receiving end of a social media backlash and some negative headlines.

As Twitter users were paying tribute to Prince using the trending hashtag #RIPPRINCE, a tweet was sent from @Homebase_help.

It was a standard cheerful customer service account post encouraging people to get in touch with any questions they may have, but with #RIPPRINCE shoehorned on the end with no other reference to the singer.

Whatever the intentions were, the Tweet looked like a careless attempt to piggyback on the main topic of the conversation of the day and twitter users were understandably not amused. They blasted the store with responses including words such as ‘inappropriate’ and ‘tasteless’. Some went further accusing the company of ‘exploiting his death’. Others simply mocked the company.

The ill thought out tweet was, to be fair, quickly removed, but the thing with social media is that by the time you realise you have made a mistake someone has inevitably already taken a screen grab and made sure everyone sees the error.

And when you create a Twitter storm you can pretty much guarantee some mainstream media interest. The Daily Mirror, The Sun, Daily Mail and Daily Express were among those to carry critical articles about the DIY retailer’s tweet.

The DIY store was, however, not alone. Similar problems were experienced in America where Cheerios and Hamburger Helper removed #RIPPRINCE tweets which also backfired spectacularly.

What does it feel like to be on a media training course?

Have you ever wondered what it feels like to take part in one of our media training courses? Well, one of our clients, Lymphoma Action, allowed us to shadow their course so that others could see how…

Spokesperson shows how to produce a powerful message

“Say it. Mean it. Put it down in legislation.” This was the key message in a media interview that grabbed our attention last week. It is a message that certainly includes some of the factors of…