Why Cameron should stop being ‘deeply concerned’

As the Prime Minister he understandably has a lot on his mind and much of it is likely to be pretty troubling.

He is also asked to comment on a wide range of issues.

But he uses the phrases a lot.

But the problem with their repeated use is that the statement begins to feel like a rushed, generic comment and not like a considered, bespoke response to the specific issue. You question whether he is actually interested in the issue he is discussing. Is he really displaying empathy? Is he bored?

To highlight the point, The Urban Dictionary defines ‘deeply concerned’ as ‘an expression used in PR, especially political, when the person or organisation is expected to care about a situation and comment on it’. It adds: “It has become a generic response to any negative situation the person / organisation is asked about bit cannot or would not actually be concerned at all about.”

The Independent recently ran story on its website which showed that putting David Cameron and ‘deeply concerning’ into Google generates 10,500 results.

This includes topics such as Nigel Farage, Syria and even allegations about match fixing in tennis.

Whether it is in media interviews, statements attributed to him from his spokespeople or tweets on his official account, the phrases keep appearing. 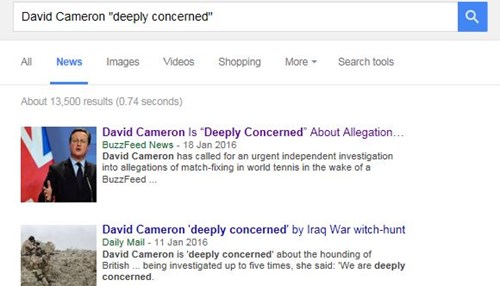 When you are asked by journalists to provide a comment you want it to feel like a direct response to the particular issue – not like a pre-prepared line which has been top and tailed.

But it is an easy trap to fall into, particularly when you are dealing with reactive issues and you are limited in what you can say.

I can clearly remember in my comms roles falling back at times on generic ‘lines to take’ for certain issues. They saved a huge amount of time because they were already approved and the journalists did not complain. But I would question now if they added much value, especially when they were just tucked on to the end of a story.

So what could the Prime Minister do differently?

The solution is as simple as developing a few variants to his statement without changing the meaning. He could consider replacing his favourite phrases with words of similar meaning, such as ‘disturbed’ or ‘distressed’.

In truth Mr Cameron is not alone in his use of ‘deeply concerning’ and ‘deeply concerned’ – President Obama and Pope Francis both use it often, as do a large number of public bodies.

But if he wants his statements to be meaningful and impactful he needs to cut down on his use of these terms.

Media First are media and communications training specialists with over 30 years of experience. We have a team of trainers, each with decades of experience working as journalists, presenters, communications coaches and media trainers. Click here to find out more about our highly practical Media Skills courses and presentation training.

What can comms teams learn about managing expectations from an elite sports coach?

Have you been asked to make something mundane ‘go viral’? Perhaps you have been requested to gain front page national newspaper coverage for a niche or hyper-local story. Ok, maybe we are…

Trading places: 7 reasons why you should target trade publications

Trade publications may not have the glamour of mainstream newspapers or appearing on TV or radio. In fact, some publications like Potato Storage International, Drain Trader and Poultry World have…