What does it feel like to be on a media training course?

Have you ever wondered what it feels like to take part in one of our media training courses?

Well, one of our clients, Lymphoma Action, allowed us to shadow their course so that others could see how they felt, what they found most challenging and what they learnt.

This is an unusual step.

The course took place earlier this year before Covid-19 restrictions came into effect. Since then, the majority of our training has moved online – just as most media interviews have.

Our online training can include all the elements of the training you are about to read about, including the TV and radio interviews, with the added advantage that it best prepares spokespeople for the current media landscape - something that has evolved dramatically since March.

But face-to-face training is still important, especially for preparing people for studio interviews, and our broadcast-quality studios are open for training and are Covid secure.

Here’s what happened during the training:

“No-one is making mistakes today; it is all about learning”.

Those were the reassuring words of tutor Paul Brennan as the Lymphoma Action delegates took their seats for a day of media training.

As the delegates discussed their previous media encounters, it became clear that Stephen was the most experienced, having done several radio interviews and appeared on BBC News 24.

“By default, I’ve become the spokesperson for the organisation,” he said.

The rest of the team had more limited exposure to the media and as the aims for the training day were outlined, it was clear that confidence and managing nerves were issues they wanted to address.

Some objectives had already been identified when the course was being put together and they were added to by the delegates at the start of the day to make the following list.

The first practical exercise of the day saw each member of the team handed one of the morning’s newspapers and asked to find a story that grabbed their attention.

This, it subsequently became clear, was to help with that ‘understanding of the media’ objective and to show what makes a story newsworthy.

As each delegate revealed their chosen story, Paul - a current working journalist - showed where it sat on the TRUTH acronym we use to show what makes a story newsworthy.

It stands for Topical, Relevant, Unusual, Trouble and Human. “Human interest is the priority box you need to tick,” said Paul.

“Human interest is everything. Lymphoma Action can tick all of these boxes – even the trouble one, which you can turn around and show how you are providing a solution.”

Another acronym was introduced – AMEN. And no, it doesn’t involve kneeling and praying to the media gods. It is a tool used to help spokespeople prepare for interviews. It stands for Audience, Message, Examples and Negatives.

Why you will always hear our tutors preaching AMEN

Paul explained that you need to know who your audience is, what the one major message is you want to get across, how you can support that message with examples and case studies, and consider what negative or difficult questions the journalist is likely to ask.

He stressed preparation is crucial even if the journalist wants to do the interview urgently. He said: “The deadline is the journalist’s problem. Don’t get bounced into an interview. Always give yourself time to prepare because once you have said something, it is out there.”

After a warm-up hobby interview, it was time for the delegates to try to put the theory they had just been shown into practice. Each one was given a face-to-face print interview lasting between five and ten minutes on a subject they had identified on their pre-course questionnaire.

“I didn’t feel that I had tried to get my message across and I tried to squeeze it in at the end,” said Ropinder when asked to give herself some feedback on her performance.

Paul’s advice on this was to use the questions to get to the message. He said: “My questions don’t matter – it is all about getting your messages across. Front load the interview with your message.”

Amanda, whose subject was the charity’s carol singing event, added: “I had wanted to talk about Christmas but found myself answering questions about other subjects.”

None of the delegates felt they had control of the interview.

But help was at hand.

With their first taste of interviews fresh in their minds, Paul introduced the bridging technique to help with that all-important control.

Paul said: “You can’t afford to avoid difficult questions because if you do, trust will go. The bridging technique helps you to address the question and then get the interview back to your message.

“You don’t need to use it all the time – use it when you need to keep the focus of the interview on your message.”

The first opportunity to put this to the test came in the broadcast-quality radio studio. 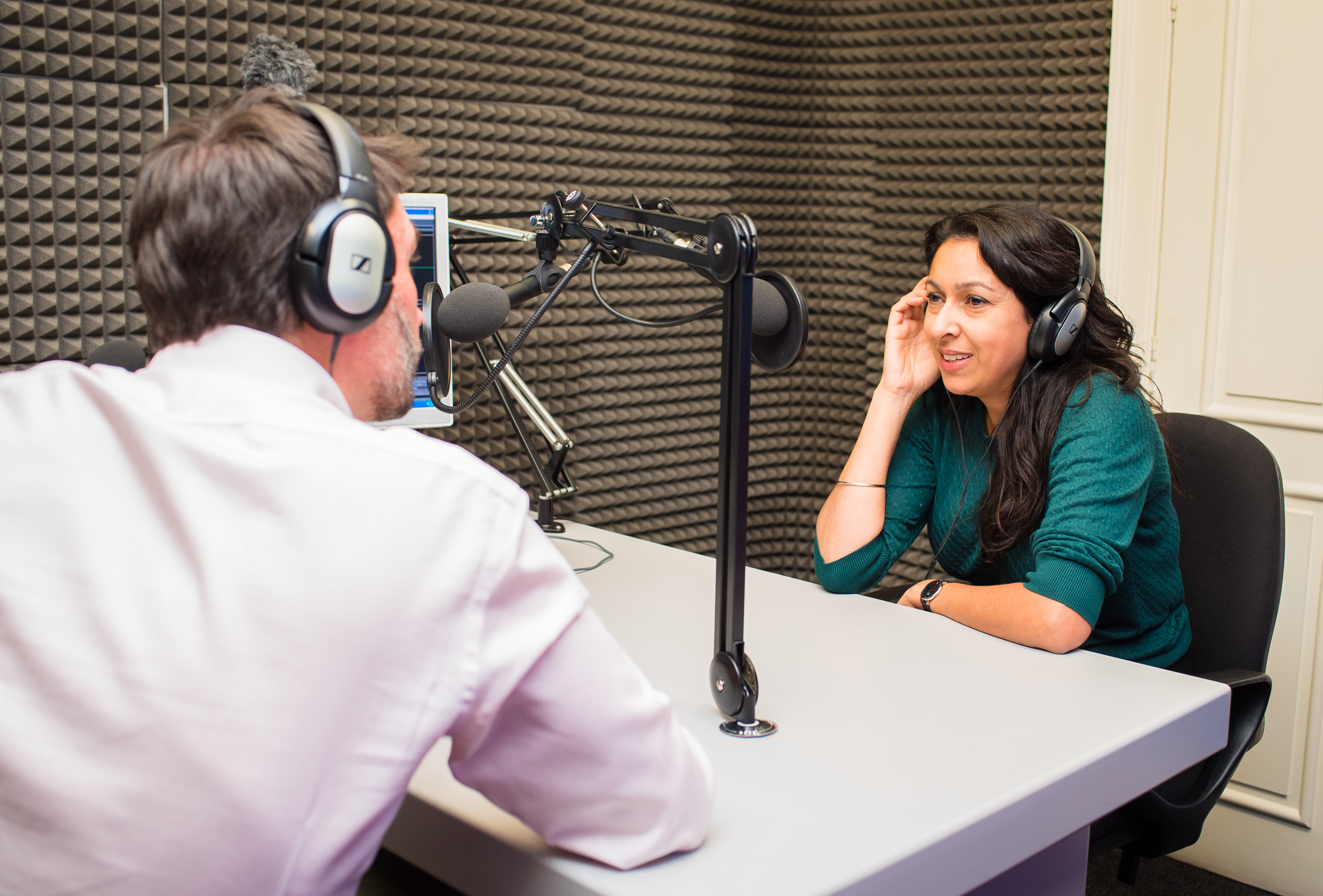 “With radio, you need to remember that the audience is multi-tasking,” said Paul. “People are doing other things, so you need to keep the message clear and focused.

“The average radio interview is about two and a half minutes, so you need to be concise, but at the same time, don’t rush your message. I’ve not asked anyone to speed up in a radio interview.

“We can hear a smile on the radio and if you are talking about something difficult then let me hear that compassion in your voice.”

Each delegate was interviewed for about two and a half minutes before all the interviews were played back to the group. While there was plenty of praise for Steven’s voice - with some suggesting he could start a lucrative side-line in reading bedtime stories - the biggest praise was reserved for Amanda.

“If I was your comms person, I would have been happy with that interview going out today,” said Paul.

He noted that both Ropinder and Karen had used the newly-learnt bridging technique, while Steven was praised for his human example, but was told to try to get to it earlier in future interviews.

From there, it was back to print, but this time in the form of a telephone interview with an off-site journalist - something we also offer on our online training courses. With cutbacks across the newspaper industry, it is more likely that a print interview will take place over the phone than face-to-face.

And it is a format that presents unique challenges as the Lymphoma Action delegates found out.

“I found it hard not seeing the person you are talking to,” said Ropinder. “You don’t see a reaction. It is really interesting how different the formats are.”

Karen added: “You have no reaction – you don’t know how they are absorbing the information you are giving them.”

After a short break for lunch and a caffeine hit in the green room, the course resumed in the Media First TV studio.

Paul said: “TV is similar to radio, but we can see you. You need to hit the ground running and we need that warmth.”

After a little advice on what to wear and what clothing to avoid, each delegate was then put in front of the camera for a short sofa-style studio interview (similar to a breakfast news set-up) before each one was instantly played back in front of the group in the dedicated gallery.

“That was really interesting as I’ve not been in a television studio before,” said Karen. “I found that I forgot about the cameras after a while.”

Amanda said: “Watching it back, I didn’t look as nervous as I felt. I had felt more confident doing the radio interview and I was worried about not being able to have any notes with me here.”

Paul noted that Steven had simplified his language and was now getting to his example earlier. He praised Amanda for sharing personal anecdotes. Karen was “both assuring and reassuring” and Ropinder was commended for her handling of a tricky question about the election and for bridging back to her message.

With an introduction to crisis media management that Lymphoma Action had asked to be incorporated into their bespoke training.

Paul introduced the CARE acronym – “the last acronym of the day” – to show what a good crisis response needs to include. It stands for Compassion, Action, Reassurance and Examples.

The delegates were then given a fictional – but realistic - crisis scenario and were asked to devise a holding statement based on CARE, which Ropinder ultimately delivered for the cameras.

Do you remember those telephone print interviews I mentioned earlier?

Well, before the packed day came to an end, each delegate was presented with the headline and first few paragraphs of the story that interview created, together with some written feedback.

“The articles are really interesting because she (the journalist) has expressed what I felt about thinking I didn’t have control of the interview,” Ropinder said.

Steven said: “Mine said how I moved on to other topics and that took away from my main message.”

As the training course drew to a close, Paul asked the delegates if they had achieved the objectives they had set-out at the start of the course – and there was complete agreement that they had exceeded those ambitions.

The delegates were reminded that they would be receiving written feedback of their performance on the course, videos of their interviews and media training handouts and they were encouraged to use the book, which includes a message development preparation guide, that they were given at the start of the course.

So, after a full day of media training, how did the delegates feel?

“The training and the practice facilities were brilliant, said Ropinder. “It was different to how I had expected it to be as I was thinking there would be a lot more theory. Having so many practice interviews across the different formats was amazing.

“We are looking to raise our awareness and have more than one spokesperson and I think that now we will be able to do more interviews, seek them out and enjoy them.”

Karen added: “I’ve never done anything like this before and it has been incredibly worthwhile. I found the part about getting to the message first particularly useful. We are going to go away and practice.

“Some of the skills are also transferable – there are other situations where you might be asked difficult questions.”

Find out more about our training by videoconference options, including media training, message development & testing, and crisis media management

Crisis management — 19 May by Adam Fisher

When a crisis strikes, you ideally have about 15 minutes to respond. Some argue you have a maximum of an hour. Others say that at a time when news often breaks on social media, 15 minutes is too…

Crisis management — 10 May by Adam Fisher

What can we learn about crisis comms from ‘beergate’?

Another week, and yet more stories about what politicians got up to when covid restrictions were in place. Whether Labour leader Keir Starmer having a beer and eating curry with colleagues is as bad…