Webinar rewind: Simplifying your sustainability message - and making it pay

Sustainability can be a vast and complex issue.

We know it is something many organisations are grappling with and struggle to go beyond targets and promises. And it is a subject that delegates increasingly want to discuss during our media training courses.

Part of the complexity is that sustainability covers so many crucial subjects.

Many of us automatically think of the environment. But it also covers issues such as health, diversity and inclusion.

To provide some clarity - and help brands to tell meaningful sustainability stories - we invited two experts to our latest webinar.

Tom Idle is an experienced journalist, podcaster and content creator, specialising in sustainability. He has worked with businesses across the world, helping them to communicate sustainability stories.

He was joined by Lisa Sanders, group head of comms and marketing at Kier Group.

The conversation began by looking at what sustainability is and defining what it means.

“I often ask businesses to look into the future 100 years from now and consider whether they will be able to do then what they do now,” said Tom. “That goes from environmental impact, and whether your customers will accept you carrying on polluting, through to how you treat your people and suppliers.

“That’s how I would define it. But I think the term ‘sustainable business’ is a bit of a non-entity in that I don’t think there is a sustainable business that exists right now. Every business has an impact, whether it is environmentally or socially. And I try to tell businesses to avoid the ‘s’ word and to look at the benefits and values of what they are doing instead.”

For Lisa, it is crucial sustainability is broken down into small subjects to make it easier to tell stories and chart progress.

“We’ve moved away from looking at sustainability as an environmental specialism and have pulled it into what we call a business-critical mindset,” she said.

“It is in our purpose as a company to sustainably deliver infrastructure.

“We launched a sustainability framework last year and have split it into two elements - environmental and social aspects – so that we can break it down and demonstrate what we are doing in those areas, rather than it being one overarching message.

“We work across the UK, and we have probably got 400 projects on-site at any one time. And everything we are doing, whether we are building a school or hospital, maintaining a building or working on a large-scale infrastructure project, will have an impact on communities.

“So, social sustainability is key because we need to be making sure those impacts we have are positive. And that we are giving something back, rather than just providing them with a service or a building.

“Sustainability is so ingrained in our people now that we sometimes struggle to find the examples to show what we are doing. People see it as something normal rather than something exceptional. But it doesn’t have to be some huge initiative that will impact tens of thousands of people. Sustainability can be about something small and tangible.”

And it is also about there being more to sustainability than protecting the natural environment. We know the planet needs help, but it is not the whole story. One of the vital themes that emerged from our webinar was the importance of looking after people as part of the sustainability agenda.

Lisa said: “Looking after people fits into two facets of our sustainability framework, around diversity, inclusion and respect. And also employee wellbeing and retention.

“The pandemic has changed things quite significantly from a wellbeing arena. Construction, rightly or wrongly, has a reputation of being male, pale and stale. So, having conversations, and getting to people who may traditionally not have wanted to talk about things like wellbeing and mental health is positive.

“I think people and companies see this as the right thing to do, and I think investors, clients, consumers pushing for it as well can bring them along even further.” 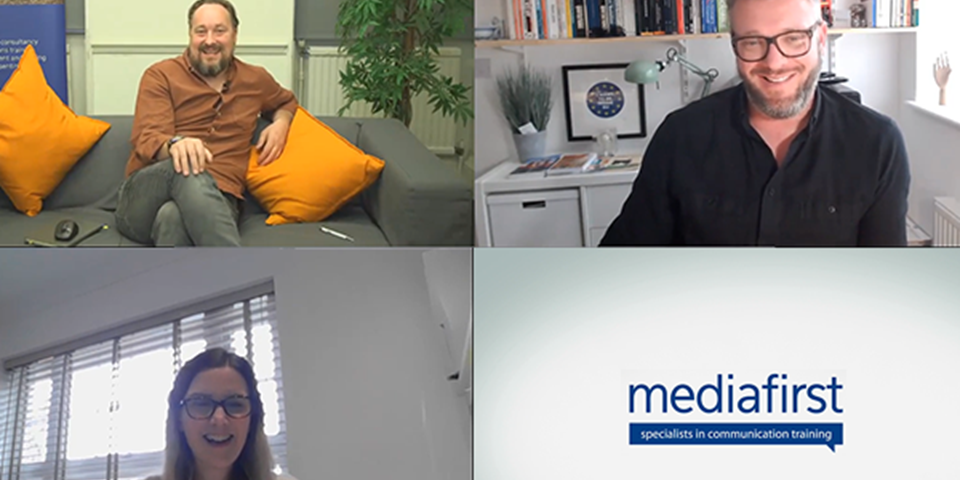 WEBINAR: SIMPLIFYING YOUR SUSTAINABILITY MESSAGE - AND MAKING IT PAY

“Health and safety was always the thing - ‘Let’s stop people dying on-site; Let’s make sure there are no injuries; Let’s make sure there is no loss of time’. Now it is about how we look after people longer term and what that means for productivity, happiness of the workforce and the ability to retain and recruit.”

One of the pivotal challenges, and fears, organisations face around sustainability is the risk of being labelled as ‘greenwashing’ – making people believe you are doing more to protect the environment than you are.

Common aspects of this include misusing terminology, overstating the impact of initiatives, and using vague language and jargon phrases. And it has the potential to put an organisation in crisis media management mode.

Our panel argued transparency, smaller targets, and simplicity are crucial. And that, as well as discussing what they are doing, brands should also talk about what they are not able to do at this point.

“Our targets are ambitious, but they are also realistic,” Lisa said. “We’ve committed to being carbon neutral in our operations, and through our supply chain, by 2045. But we’ve also said it will be within our operations by 2039.

“I think it is important we are as transparent as we can be on those things because you can quite easily put out one big target that ‘we will do X by X’. But what is the detail behind that? Unless you say how you are going to do it and by when it is just scratching the surface.

“I think there is still a lot of education to be done on sustainability, which is why you need to be transparent. You can talk about things that are top-level, and because people don’t necessarily understand all the terminology that sits beneath it, you can gloss over things quite easily. You could do some of that short term, but if you want to make long-term impact, the story has to be as simple as it can be for every level of audience.

“I always think that if I can explain it to my nine-year-old, that is the level of language I should be using.”

Tom added brands should feel comfortable explaining why they can only reach a certain point at this stage with the environmental targets.

“Often transparency is about trying to fill in the gaps because if you leave blanks in your narrative, questions will be asked, and accusations of things like greenwashing will be raised,” he said.

“So, I would suggest companies fill in those gaps. Explain why you have only gone so far.

“And I think that goes down much better with the audience. They will look at it and think, ‘there’s a level of honesty there, and openness that I can accept, and the story still stacks up because you have also given me what you are not doing’.

“That is often the missing part when companies fall into greenwashing and trying to grab quick PR wins with this stuff.”

Collaboration can be a bit of a buzzword. But both Tom and Lisa feel more organisations should work together to increase their sustainability impact.

“There are more and more examples of this,” Tom said. “I’m working with a bunch now called Action For Sustainable Derivatives, made up of cosmetic companies.

“As individual companies, they don’t source much palm oil, so they don’t have much influence on changing the supply chain.

“But they all source from roughly the same areas of the world. And they are clubbing together to improve their transparency as a collective.

“And as a group, they are much more influential in terms of trying to change behaviours.”

Lisa added: “I think it is much more beneficial if we work together. It doesn’t mean we can’t have our targets or that there are things we can’t do ourselves, but having a common goal is beneficial.”

So, what makes a good sustainability story, and where can we find them?

For Tom, this goes back to being open and transparent.

He said: “Authenticity grabs me. I like when companies say they are doing something good but are backing that up by saying they still have more to do.

“If I'm working with a dairy company, it's important to address the elephant in the room, which is the impact of dairy farming on greenhouse gas emissions. They need to be upfront about that before leading into what we are doing about it. And then they need to think about how that stacks up.

“Companies that are more upfront about the scale of the challenge are the ones that grab my attention.

“Also, doing things differently is important. There are lots of stories of start-ups out there, whether they are focused on circular design or tackling the climate agenda. If they are focused on more than just turning the dial and are looking to transform things, then that excites me as well.”

For Lisa, the answer lies in something we’ve all been doing much less of during the past 18 months – going out and talking to the workforce face-to-face.

“I’ve been out at employee events over the past couple of weeks, going out to sites and having conversations with people, asking them what they are doing and how they are going about it,” she said.

“And, suddenly, all of these amazing stories came out from them. And I would not have got those from a Teams call, even if I had set it up as an ‘I want to get your sustainability stories’ call.

“They come up naturally through conversation.”

Metrics play an increasingly vital role for comms teams. And they are particularly important when it comes to sustainability, where actions often speak louder than words, and brands need to avoid greenwashing accusations.

So, what should we measure?

“We have just brought in a new social value calculator," Lisa said.

“There are a number of people that will offer you all different types of measurement. It is a long process, but you have to look at your framework and your targets and find a provider who will be able to help you measure it. I don’t think there is a one-size-fits-all option.”

Tom added: “It is also not just about what you are measuring, but why you are measuring it. You might hear someone say, ‘We have x number of mental health first aiders now’. Ok, but what does that mean? Why does that prepare you better as a business this year compared to last?

“You also need to use metrics that you can keep coming back to so that you can show how things are progressing.”

Want to find out more? You can watch the full webinar here. And we will be answering all the questions we didn’t get round to during the conversation in a future blog.

Click here to find out more about our media training and crisis communication courses.

Many brands are grappling with sustainability and purpose. They are topics that regularly come up in conversation with our clients who are increasingly wanting help telling sustainability…

Have you played Wordle yet? If you haven’t, you’ve probably noticed some of your friends posting cryptic grids of different coloured squares on social media and either lamenting or boasting about…