Are you finding you spend too much time in meetings and administration and not enough on your core priorities?

Unplanned, reactive work can often take over, particularly when an organisation is in crisis media management mode.

Many teams are also stretched. Some in the public sector, where funding has been cut, are trying to plug gaping holes.

It is something we are going to explore in our next personal development masterclass on The Media Team Academy, in a session led by Kirsty Waite, a tutor at The BCF Group.

Ahead of the masterclass, we thought it would be helpful to look at three tools Kirsty recommends for better time management. 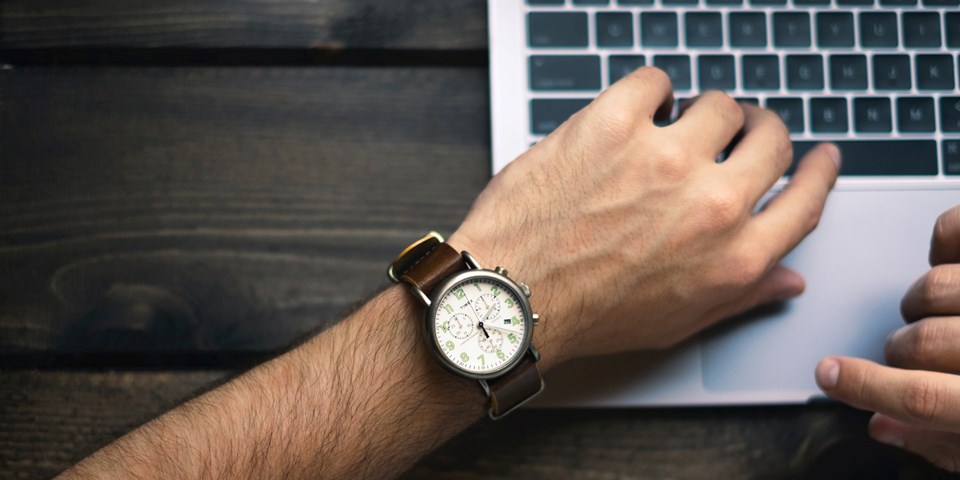 Already a member of THE MEDIA TEAM Academy?

Don't forget to join us at 2pm on Thursday (5/5) for the Effective Time Management masterclass. Check your inbox for the invite.

The Eisenhower Matrix is a tool that helps people prioritise their work based on its urgency and importance.

The simple tool is named after Dwight D. Eisenhower, the 34th President of the United States, who was known to arrange his work into important and urgent matters.

The matrix goes further than this and divides work into four categories.

“We start with ‘important and urgent’ tasks,” said Kirsty. “These are the things you have to do. If you don’t do them, there is an impact on your role and others. For example, not doing it may mean you hold others up or a project is delayed.

“Then we have ‘important but not urgent’. These are vital tasks for you and the business that don’t have an imminent deadline - they don’t need to be done today or tomorrow. It may be a contribution to the longer-term business strategy.” 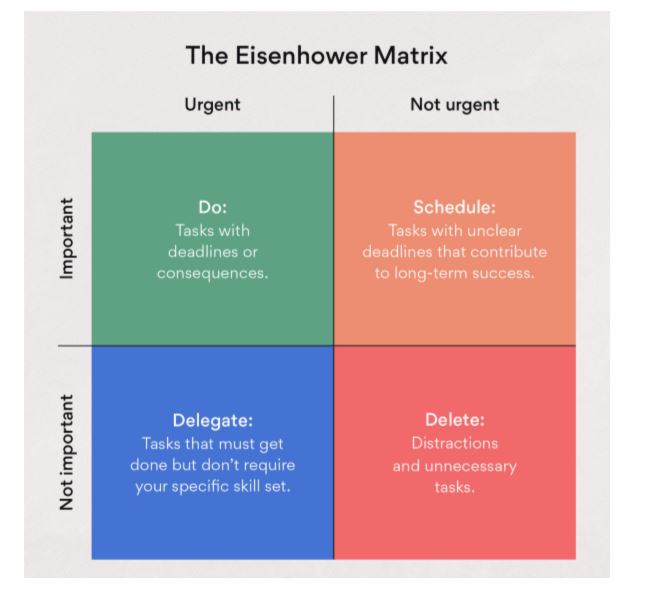 The next category is for those tasks which are ‘not important but urgent’, which could sound like a contradiction.

Kirsty said: “These are the tasks that might not need to be carried out by you. They could be things you could delegate to others.

“Let’s say an article is needed for an internal newsletter going out on Friday – that is urgent, but it might not be important you do it. It could be something someone else in the team could write.

And finally, we have the ‘not urgent and not important’ tasks.

“These are the distractions,” Kirsty said.

“These are the things that are not important to your role and there are questions around whether they need to happen.

“It’s those jobs that end up on the bottom of all your ‘to do’ lists and never get done. They annoy you because they are always there – but you never get around to doing them.

“Ultimately, the question with these is if they are not urgent and not important to your role or the business, why are they on your list? Maybe you should be pushing back against these tasks and discussing with your line manager why you have been delegated them rather than having them fight for your time.”

Diary management is crucial for staying on top of your workload and builds on how the Eisenhower Matrix organises tasks.

“This is a step process,” said Kirsty. “And the first step links to your ‘to do’ list and prioritising it based on the matrix.

“Then you need to look at your diary and think about what tasks you need to do that day or over the next few days.

“And then block time out of your diary to make sure you can do those tasks.

“Once you’ve done it, look at the stuff that is not urgent, but that has long-term importance, and block out times when you can do those, so you know the time will come around to work on them.

“Then it is about having boundaries and protecting the time.”

Having worked in comms for many years, I know the work can come from many different sources. If you have blocked time out of your diary, what do you do if someone senior asks you to focus on something else?

Kirsty said: “You’ve probably had a situation where someone comes to you and says ‘this is important – I need your help with it now’. It might be crucial to them, but it may not be as vital as the work on your ‘to do’ list. And the consequences of you not doing what is on your list could be more significant for the business.

“This is about having a conversation with those people and saying ‘these are the tasks pivotal for my role – If I don’t do them, the consequences will be…’. Then you can openly chat about what the priority should be and agree on the way forward.

“Diary management is about being aware of how you spend your time and being intentional about how you use it. And also taking control over how you use it. Of course, there may be times when you can’t dictate what you do.

“But be brave and explain to them the consequence of you not doing what is on your priority list and whether they are comfortable for that to happen.”

Do you want to be part of our masterclasses?

Our masterclasses are exclusive sessions of the The Media Team Academy. The next cohort of the year-long learning and development programme starts in July.

The final technique Kirsty believes comms professionals should consider is a productivity hack.

Developed by Francesco Cirillo in the late 1980s, the Pomodoro Technique breaks work into periods of around 25 minutes with a short break between each section.

Essentially, you get work done without it feeling arduous or overwhelming. 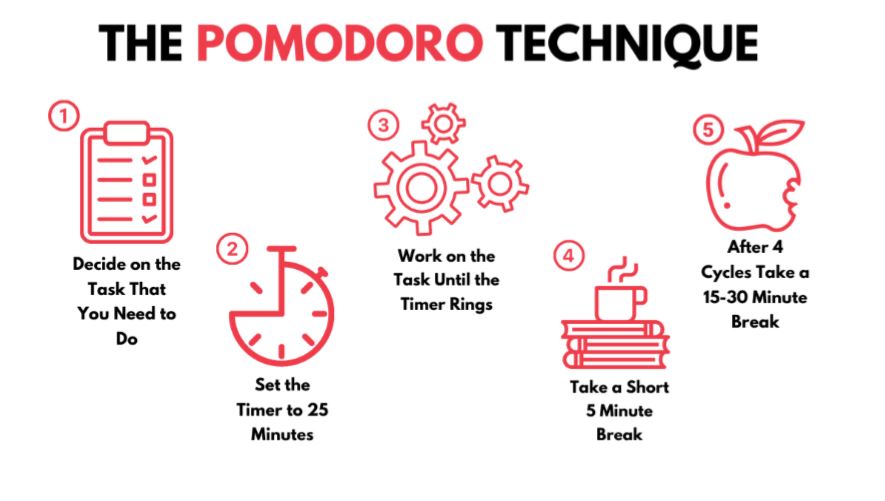 Kirsty said: “This is a technique to get things done and improve productivity and efficiency. Use the Eisenhower Matrix and decide what you need to do your time blocking.

“Choose the task and set your timer for 25 minutes. Then focus on that task and work hard on it until the timer goes off.

“Then you take a five-minute break before going back and doing it again for another 25 minutes. You are working in short bursts, and you can do this four times before taking a longer break.

“Then you can come back and decide the next task to work on using the same technique.

“It makes you dedicated, and you plan in the time when you are not going to be focused. It is much better than sitting there and thinking, ‘I must do that, but I need to check my emails first’.

“You set yourself up in a mindset where you are just going to focus on a task for 25 minutes, and everything else will be switched off. And then you give yourself five minutes to do whatever else you want to do.

“Or it could be that for the next 25 minutes, you are going to focus on getting through your emails. Whatever you choose, you are segmenting your time in your diary to be focused.

“You may not need to section your whole day like this. But it is a great technique to adopt with your pressing tasks.

“It doesn’t necessarily need to be 25-minutes. You could maybe go up to 45-minute chunks. But the science behind it is based on it being short chunks, so your mind does not wander off.

These techniques all sound great.

But anyone who has worked in comms knows the working day has a habit of being unpredictable and ignoring the best-laid plans.

So, what happens with these time management techniques when things go wrong, and the organisation is in crisis media management mode?

“These are proactive techniques that help you plan your time when you have the time,” Kirsty said. “If you walk into work and something has gone badly wrong, you know what on your workload is a priority.

“It means you can inform people it will be delayed because of what has happened. You can manage their expectations.

“And you can do it quickly if you have a grip of your diary. It is much more controlled than just focusing on this immediate crisis and then looking to pick up all the pieces of the rest of your work when it calms down.”

Kirsty will explore these techniques further, together with another method called The Circle of Influence, and much more during the next The Media Team Academy masterclass at 2pm on Thursday (5/5).

Click here to find out more about our media training and crisis communication training courses.

Reputation management: How comms pros can limit the hit and assess the impact

Reputation is critical to the health of any organisation. But reputation is also increasingly fragile. A single incident can cause severe damage to a brand. And that harm can be rapidly inflicted…

How can you assess the reputational damage caused by a crisis?