The H&M crisis: A tale of multiple apologies

If at first you don’t succeed, try again.

This was the approach taken by fashion brand H&M when it found itself in a major crisis media management situation.

The Swedish retailer faced an online backlash, with accusations of ‘casual racism’, after it used a black child to model a hooded top with the slogan ‘coolest monkey in the jungle’.

Additionally, amid the fallout, the musician The Weekend vowed to no longer work with the brand and stores in South Africa had to temporarily close after protests erupted.

woke up this morning shocked and embarrassed by this photo. i’m deeply offended and will not be working with @hm anymore... pic.twitter.com/P3023iYzAb

H&M’s response has been a tale of multiple apologies, ranging from the unconvincing to the emphatic.

Here’s what we can learn from them:

H&M’s first apology included the line ‘we sincerely apologize (SIC) for offending people with this image of a printed top’, while a spokesperson quoted in media articles said ‘we apologise to anyone this may have offended’.

Similarly, on the company's customer service Twitter account, customers were told it was sorry the image 'could have been perceived' as being offensive and later that it apologised to 'anyone this may have offended'.

We are sincerely sorry that this image could have been perceived as an offense. This image has now been removed from all H&M channels and we apologize to anyone this may have offended

Hi there. This image has now been removed from all H&M channels and we apologise to anyone this may have offended.

The issue with both these apologies is that they do not sound genuine and they suggest disappointment that people have taken offence rather than show any regret for the error.

When organisations use words like ‘may’ and ‘if’ in their apologies it can appear like an attempt to play down the incident and can make it seem like it is not convinced it had done anything wrong.

When an organisation says ‘sorry’, it needs to look like it really means it, not because it thinks it should.

Start with the apology

Compare the ‘we apologise if’ approach with the line the brand used at the start of its third apology.

“Our position is simple and unequivocal – we have got this wrong and we are deeply sorry”, it wrote.

That is an emphatic apology, which sounds heartfelt and genuine, rather than drawn from a file of pre-prepared lines to take during a crisis media management incident.

Putting the apology to customers at the start of a statement shows they are upmost in your thoughts.

In the store’s first response to the incident there was at least a mention of the action it was taking as we were told that the image in question was being removed from ‘all H&M channels’.  We were also told that there would be a review of ‘all internal policies’.

The action in the subsequent apologies was more emphatic. Now we learnt that not only had the image been taken down but the top was no longer available and, in the final apology, we were told it was being recycled.

The recycling message was a good one and was clearly aimed at showing this a company with an ethical core.

One of the real strengths of the final H&M apology was that it took full responsibility for the issue.

There was no attempt to deflect blame, make excuses or justify the product.

It said: “We agree with all the criticism that this had generated – we have got this wrong and we agree that, even if unintentional, passive or casual, racism needs to be eradicated wherever it exists. We appreciate the support of those who have seen that our product and promotion were not intended to cause offence but, as a global brand, we have a responsibility to be aware of and attuned to all racial and cultural sensitivities – and we have not lived up to this responsibility this time.”

It can be tempting for organisations to say something along the lines of ‘we will ensure this will not happen again’ as part of the apology.

Although it’s easy to understand the temptation, it is something we advise against during our crisis communication training courses as this vow can be hard to live up to and can make brands a hostage to fortune.

The third H&M apology used a subtle variation to this approach which removed the over promising element.

It said: “We will now be doing everything we possibly can to prevent this from happening again in the future.”

One of the odd things about the way H&M have handled this crisis is that it is not particularly clear where to go for the latest information.

The first apology appears to have been sent to reporters upon request; the second took the form of a tweet, and the final apology was published on the company’s website and, somewhat uniquely, only made available on Twitter through the company’s bio. 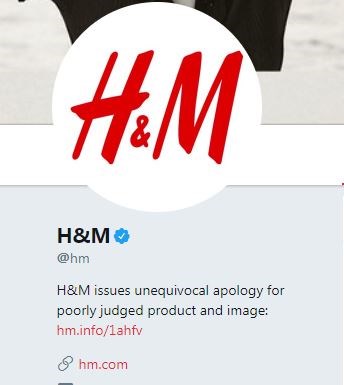 Journalists and customers need to know where to go for the latest updates during a crisis and should not need to search multiple channels.

Face up to the crisis

During a crisis it is important for brands to show leaders are taking responsibility and are involved in trying to resolve the issue.

It can carry real weight if the person in charge delivers the apology or puts it in his or her name.

Despite several attempts at apologising, no-one from H&M is quoted in any of its statements. Even the third apology, which comes in at a fairly hefty 312 words and contains messages which can easily be turned in to quotes, is completely anonymous.

Get it right first time

As good as the final apology is, it shouldn’t really take three attempts to get the apology right during a crisis media management incident.

Organisations can come under intense pressure in a crisis and in this particular incident there has been media interest from across the globe.

But H&M still needs to ask itself why the emphatic and compassionate tone of its final apology didn’t happen earlier.

*Download our FREE eBook to find out more about planning for a crisis. It includes a checklist to helping you identify the right spokesperson, messaging templates and a risk register to help you identify your organisation’s vulnerabilities.

Click here to find out more about our journalist-led crisis communication and social media training.

Was the statement a journalist threw in the bin really that bad?

“Guff.” That was the verdict of one journalist on a statement he was handed when a company refused to make a spokesperson available. Not only that, but he screwed it up and lobbed it in the…

What does a journalist want from you in a media interview?

It is always interesting when we ask for delegates’ perceptions of journalists and the media at the start of our media training courses. Those who have had little interaction with the media often…